Google Makes a Splash in Melbourne

Recently Google opened a stylish new office space in Melbourne to accompany its Sydney headquarters. The new fitout sits on Collins Street, in Melbourne’s CBD, and features a graffiti wall, auditorium and workspaces named after local landmarks such as The ‘G, Flinders Street and the Yarra Valley.

The office – which is currently only half filled – was officially opened by Victorian Minister for Small Business; Innovation and the Digital Economy; Trade and Investment, Philip Dalidakis MP, with the words: “OK Google, open the Google Melbourne office”. 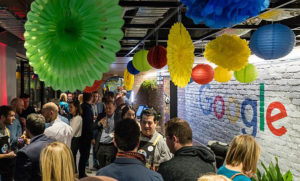 According to the web giant more than 200,000 Victorian businesses use Google to link up with customers in Australia and around the world, and those businesses see almost $4 billion of benefits generated by using Google products and services